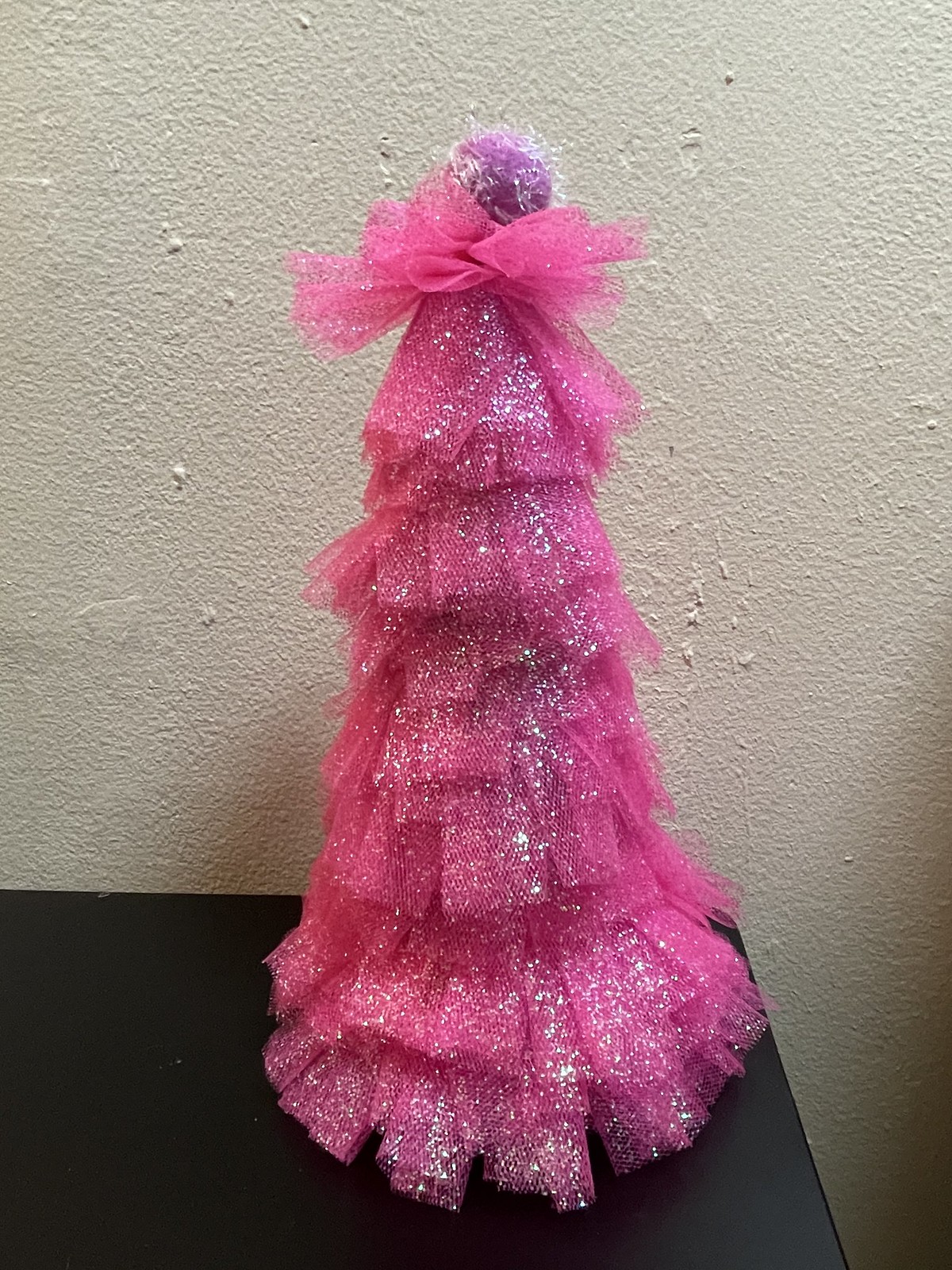 I love decorating Foam cones with different textures and the texture I used today was Tulle. In this blog post, I will show you how I made this Tutu Cone Tree for a Valentines Day table decoration.

The tulle I used was Hot Pink glittered Tulle by the brand Celebrate It. The foam cone was also from Michaels and the brand is Flora Craft. 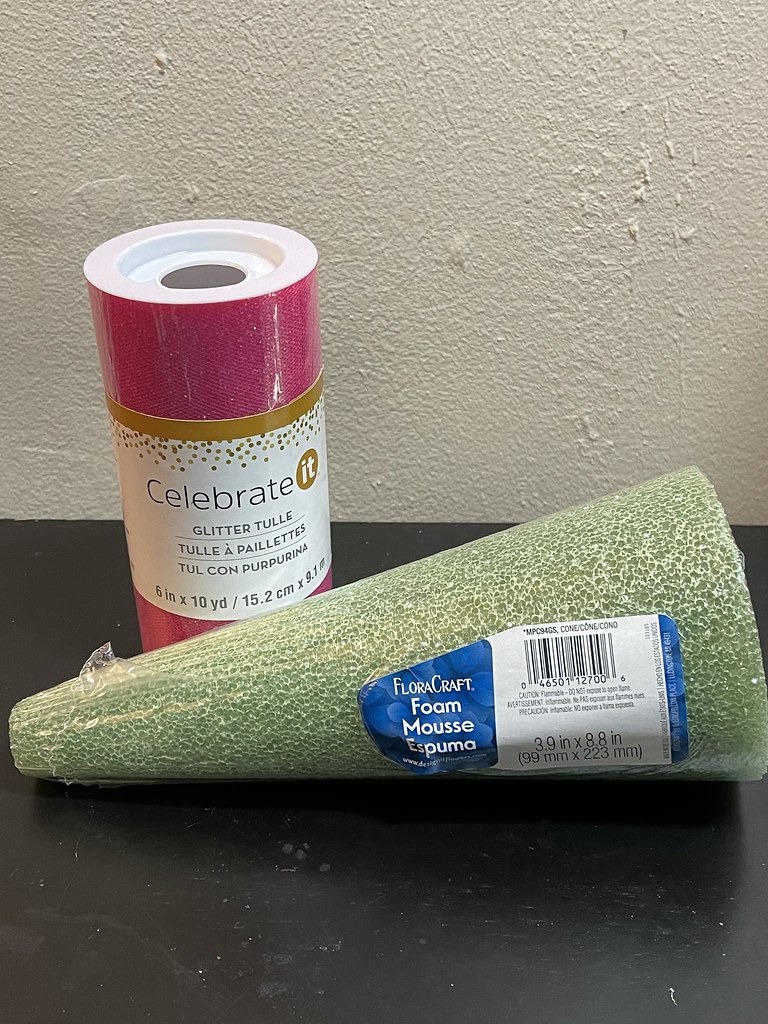 For this project, I needed many squares about 3 inches in width. I cut off about a yard of the tulle at first. The tulle is wide so I cut the yard of tulle piece into 2 pieces length wise. I wasn’t careful for it to be straight, I just cut straight down the middle. It actually wasn’t straight at all.

I measured about 3 inches width of tulle with a ruler and cut it. It didn’t have to be accurate, some squares ended up being about 3 1/2 – 4 inches wide as my cutting continued. 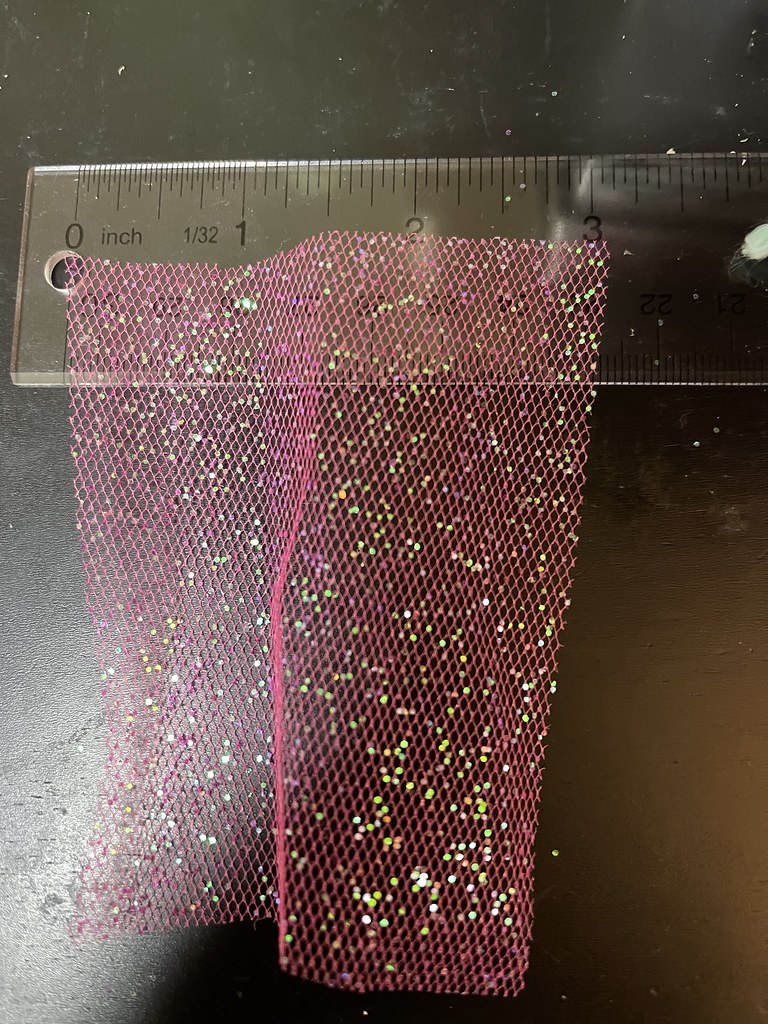 I grabbed a piece of yarn and loosely tide it around the base of the cone – about an inch up from the bottom, and then I cut it. I left enough yarn for me to knot when the tulle was secured onto it. 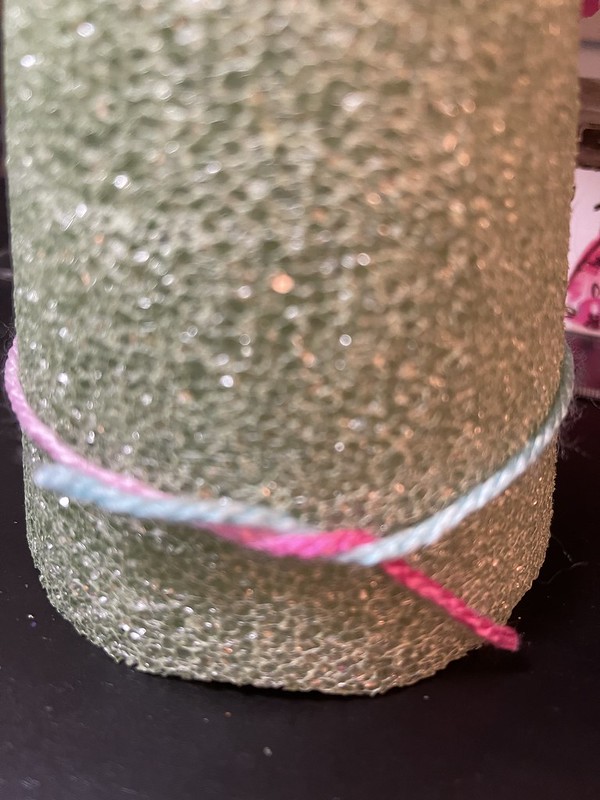 Securing the Tulle onto the Yarn String

I took one of the 3 inch tulle squares and folded it in half, horizontally. 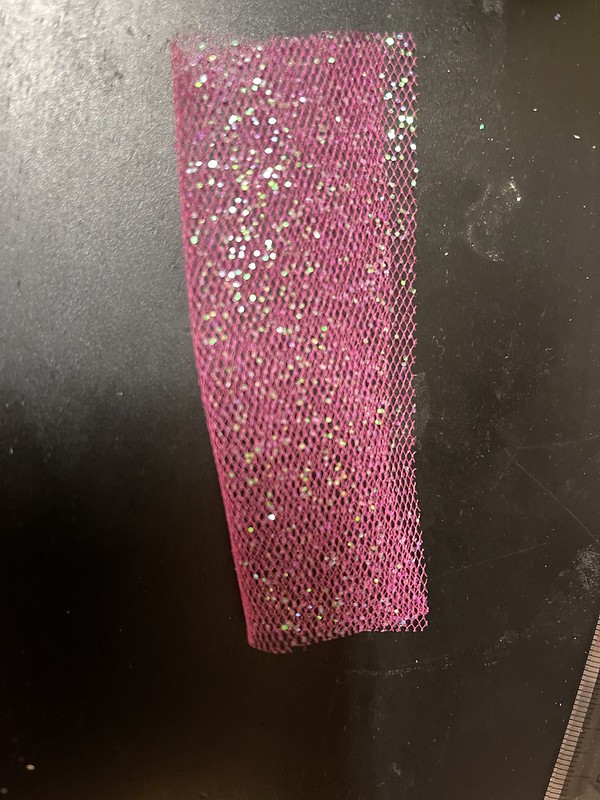 I folded it in half again, horizontally. 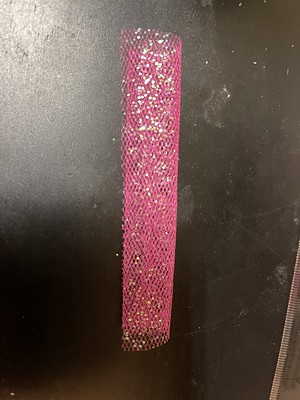 I placed the yarn over the middle part of the folded tulle and put a glob of glue. 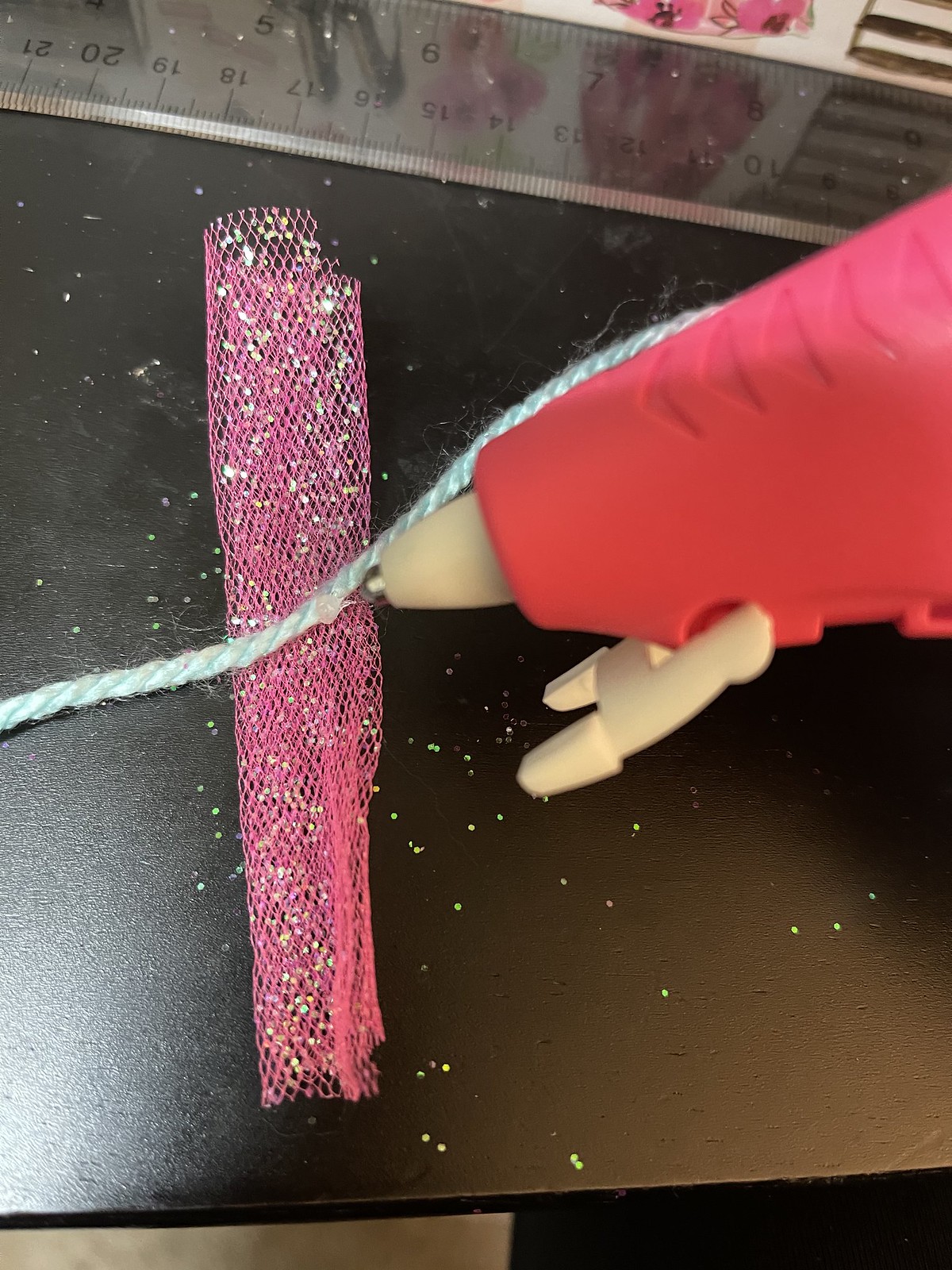 ** Disclaimer, the glue seeps through the tulle so this project will get messy. There was glue all over the table and on my hands by the end of it. Also, this glittered tulle sheds glitter everywhere**

I folded the glued tulle in half over the piece of yarn. This project was tricky because the tulle kept flipping up and the glue wouldn’t hold because it was wet and the tulle was quite resistant.

I used a book and a weight to train the Tulle to stay flat by placing them on top of the tulle and the string. I did this with every piece of tulle I stuck onto the string. It was a very messy and time consuming process to lift the book and the weight each time I placed a piece of tulle onto it.

When the string was full of folded over tulle pieces, I left it weighed down for about 5-7 minutes. 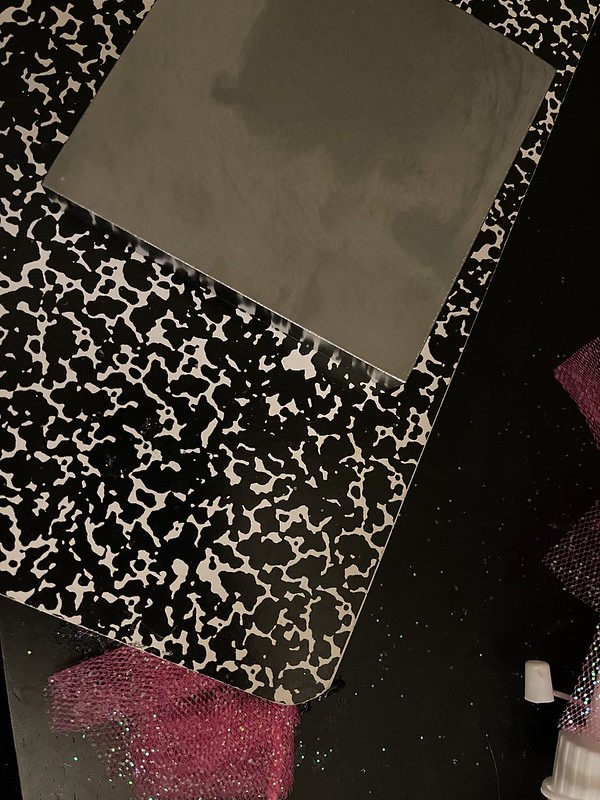 I followed the same steps with each square until the string was filled. 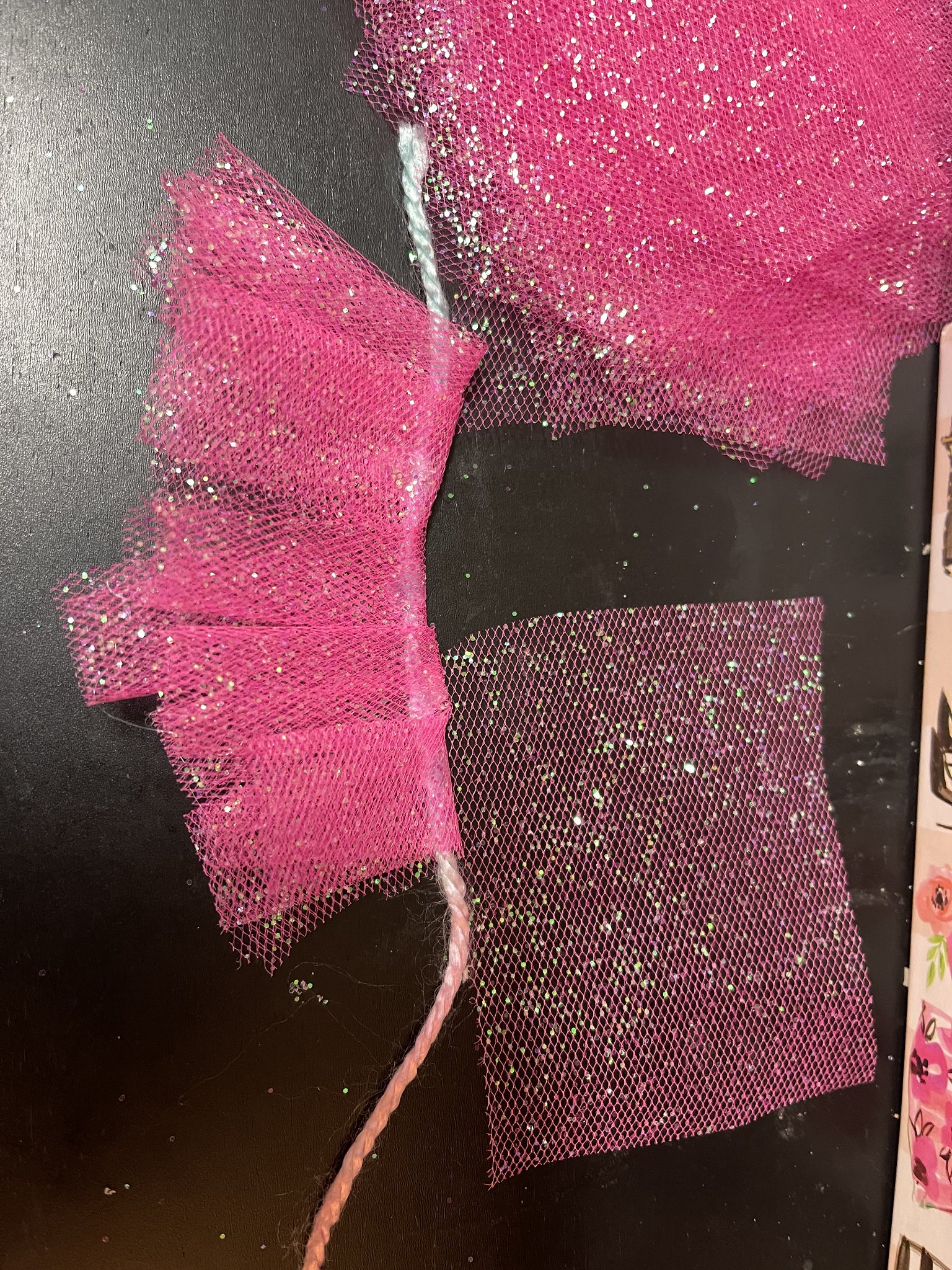 I left enough room at the ends to tie around the cone.

I tried to lay the next piece of tulle halfway over the first to try to avoid gaps when I would have to stretch the string around the cone. 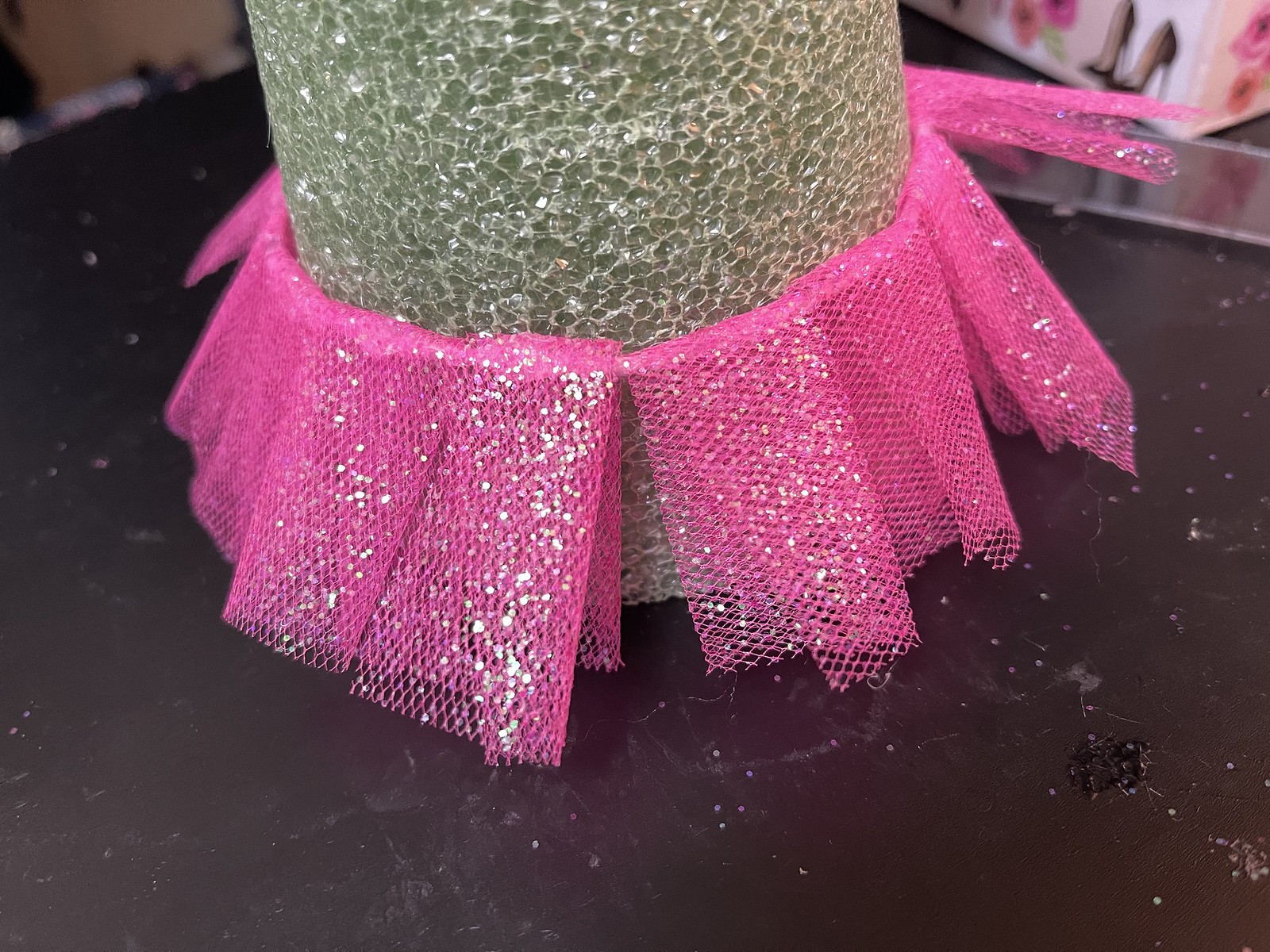 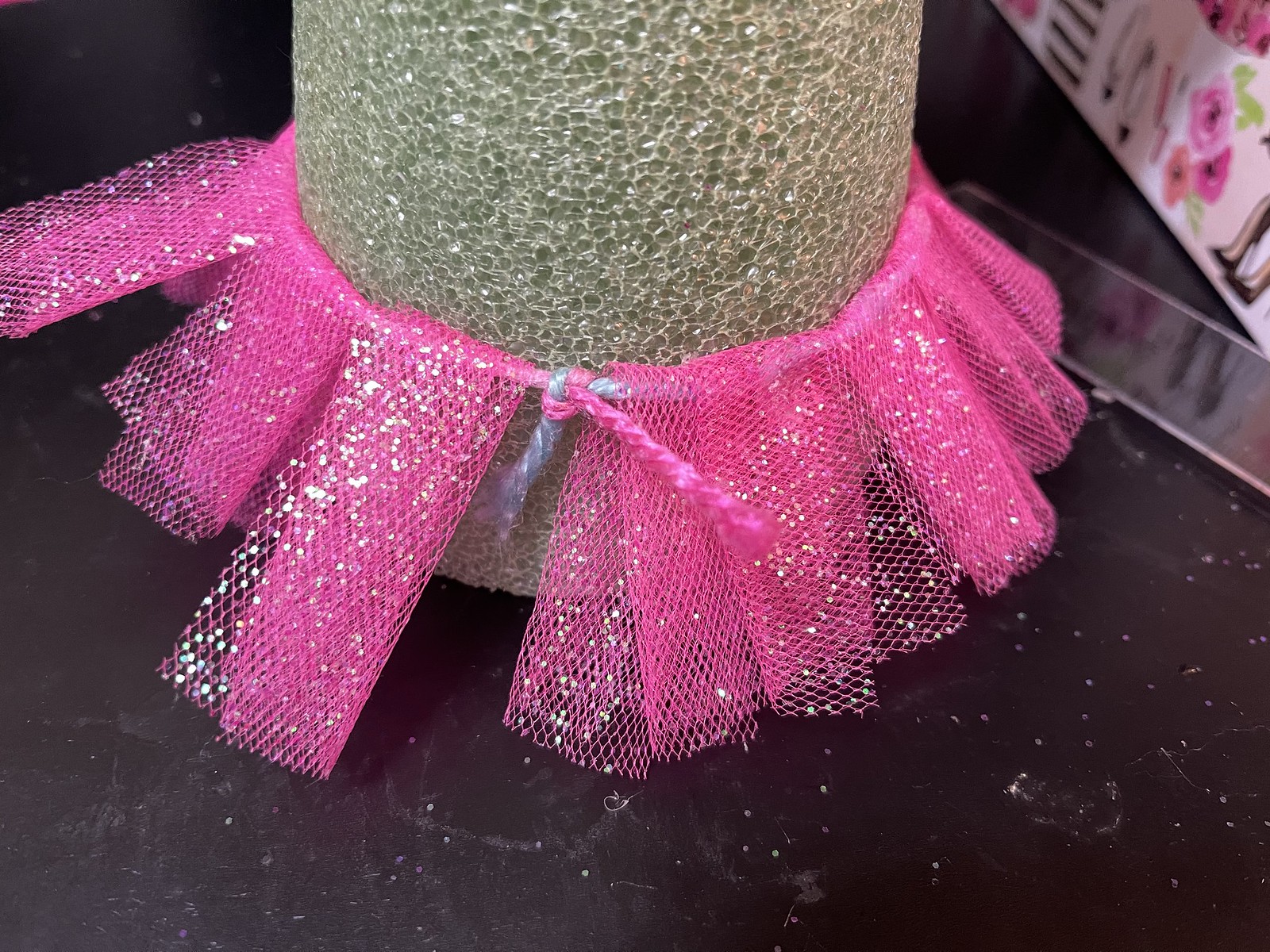 I secured the first tutu skirt layer with placing a rubber band just under the string on the outside of the skirt.

Repeat Until You Get to the Top

I followed the same steps with tying the second yarn string loosely around the cone and leaving room to tie a knot, about an inch from the bottom tutu.

I added the tulle, weighed them down and waited about 5-7 minutes for them to stay flat.

When flat, I tied the string onto the Cone and secured it with a rubber band. 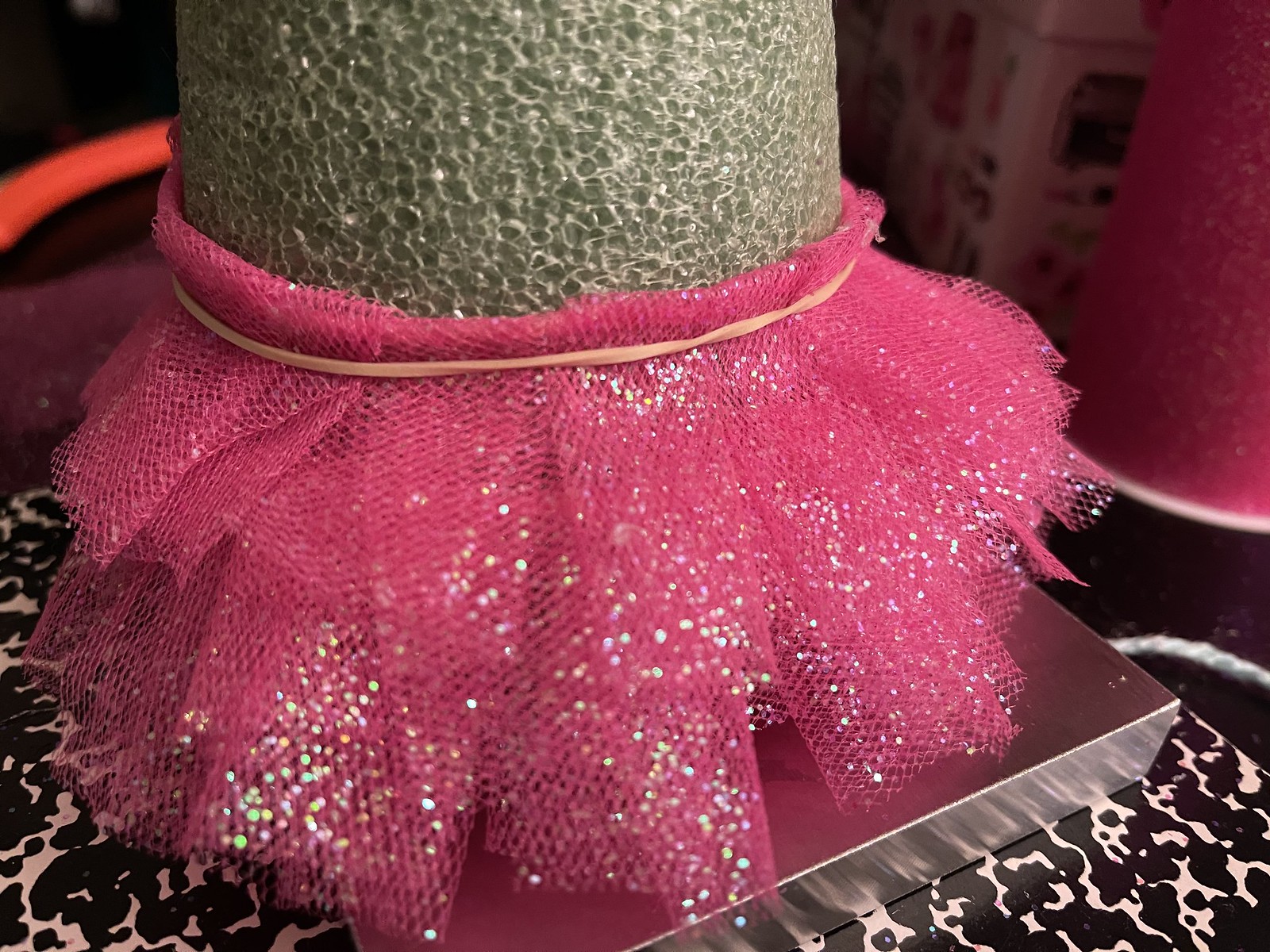 I followed the process again…. 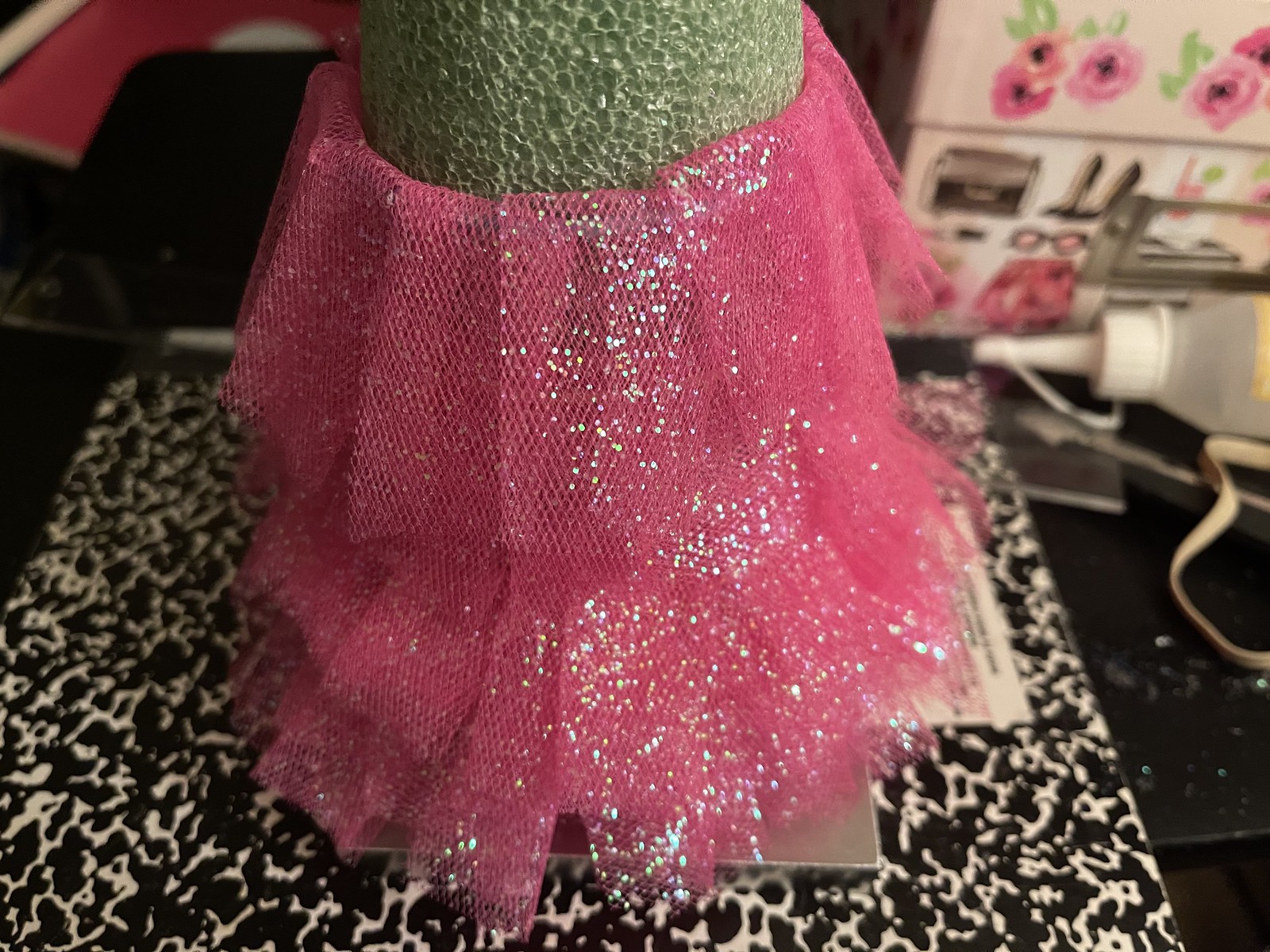 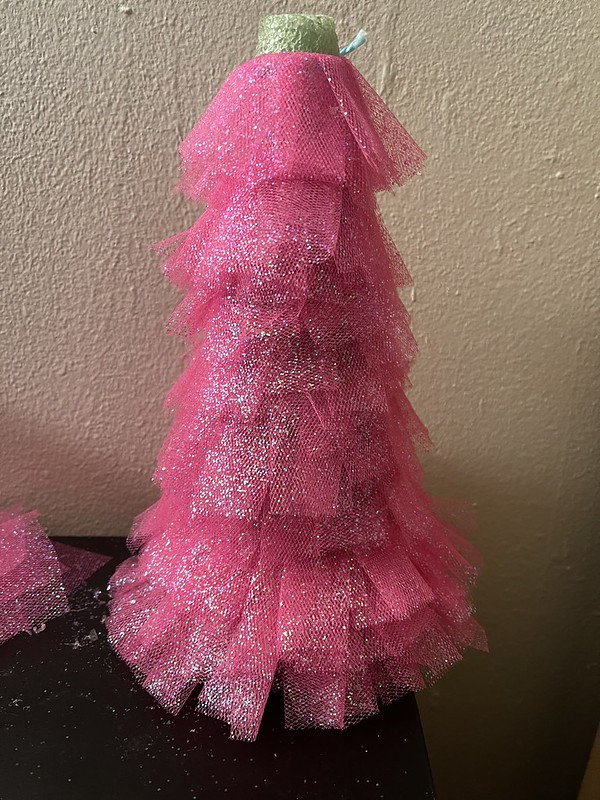 …until I reached the Top! 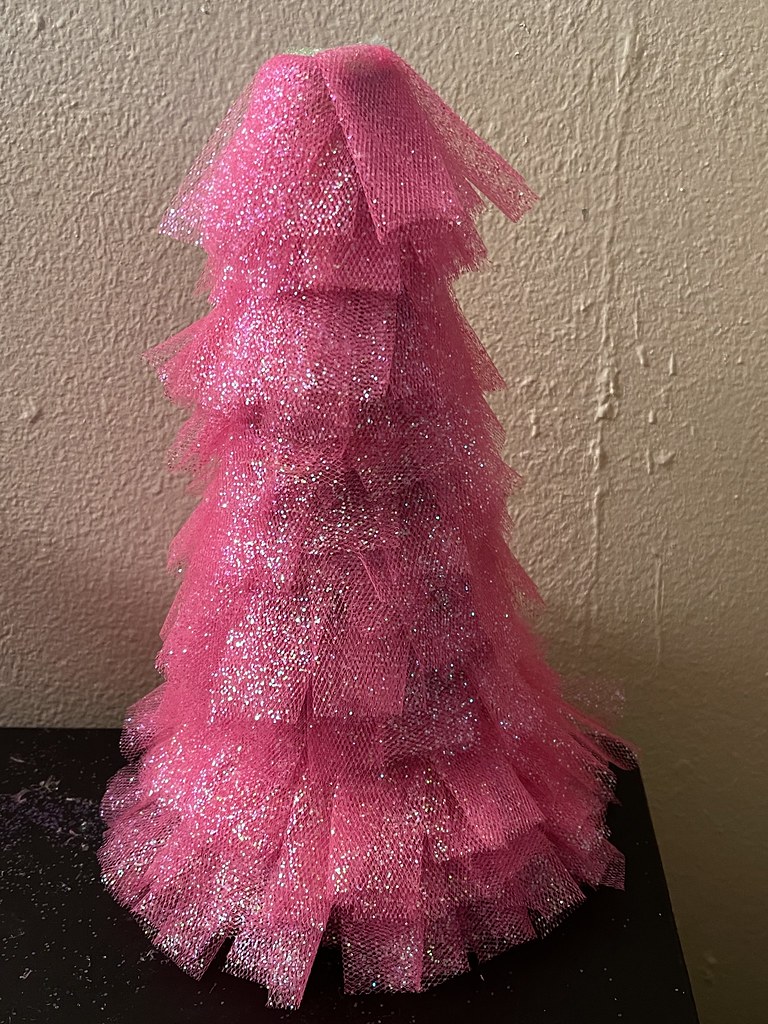 To create the topping, I folded the tulle into thirds as I did with all the others. I put a dab of glue to the center of it. 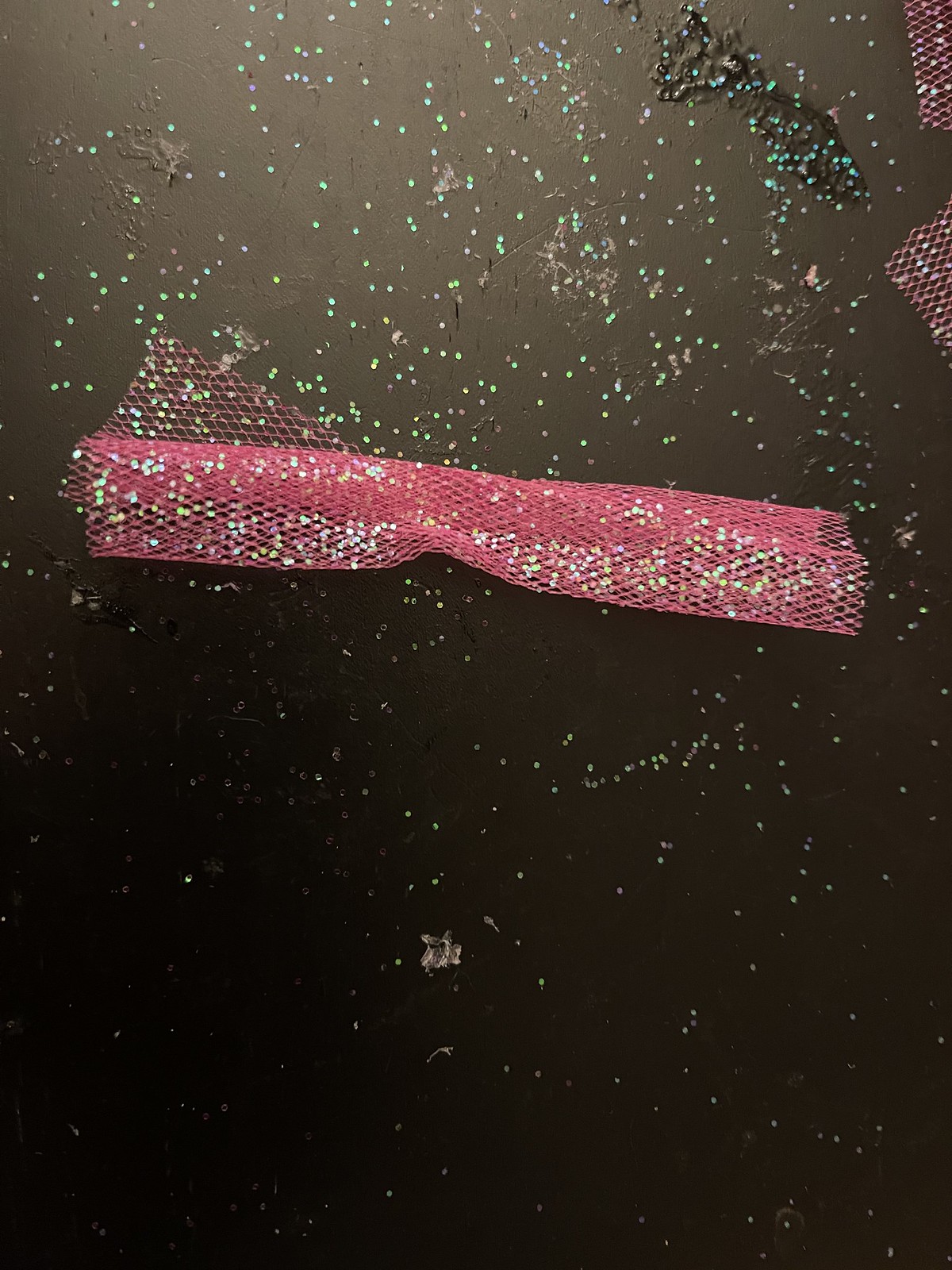 I folded another piece and laid it on top of the first piece forming a cross shape. 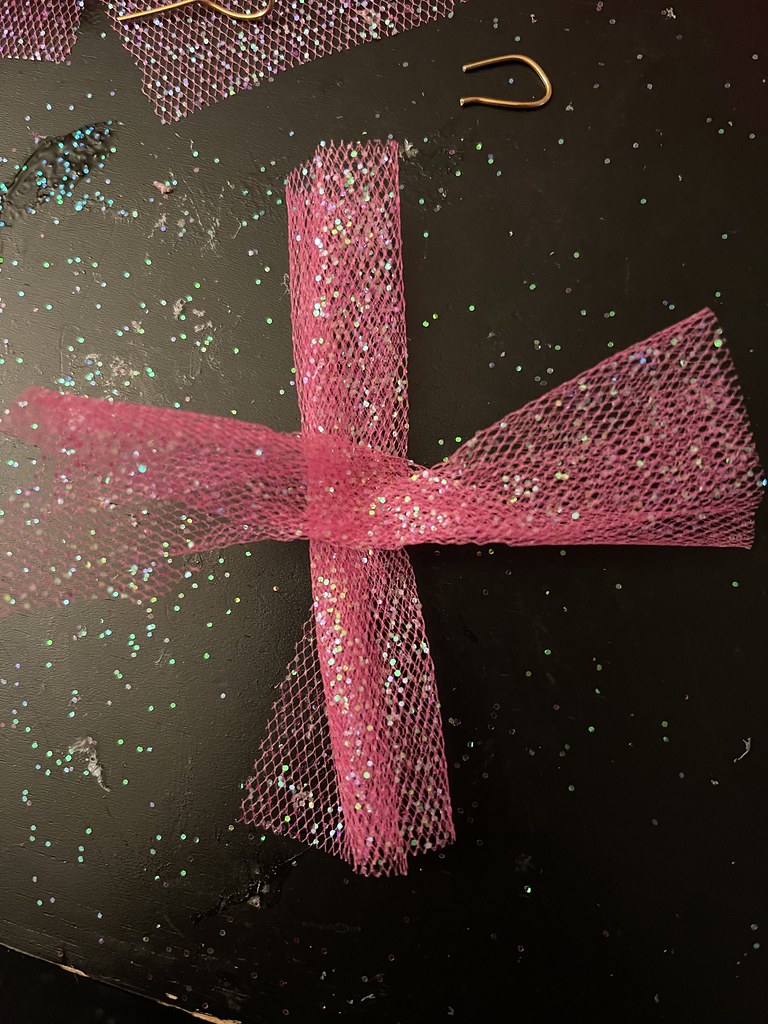 I pressed the center to ensure they stuck together. I placed another dab of glue in the center of the cross and place another folded piece diagonally across and pressed it to stick them together. 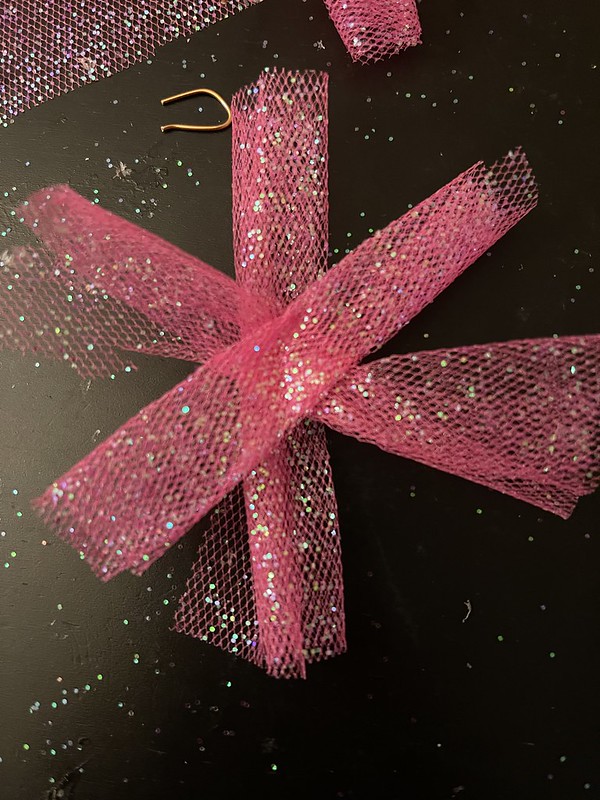 I added another piece on top with glue… the shape created an asterisk. 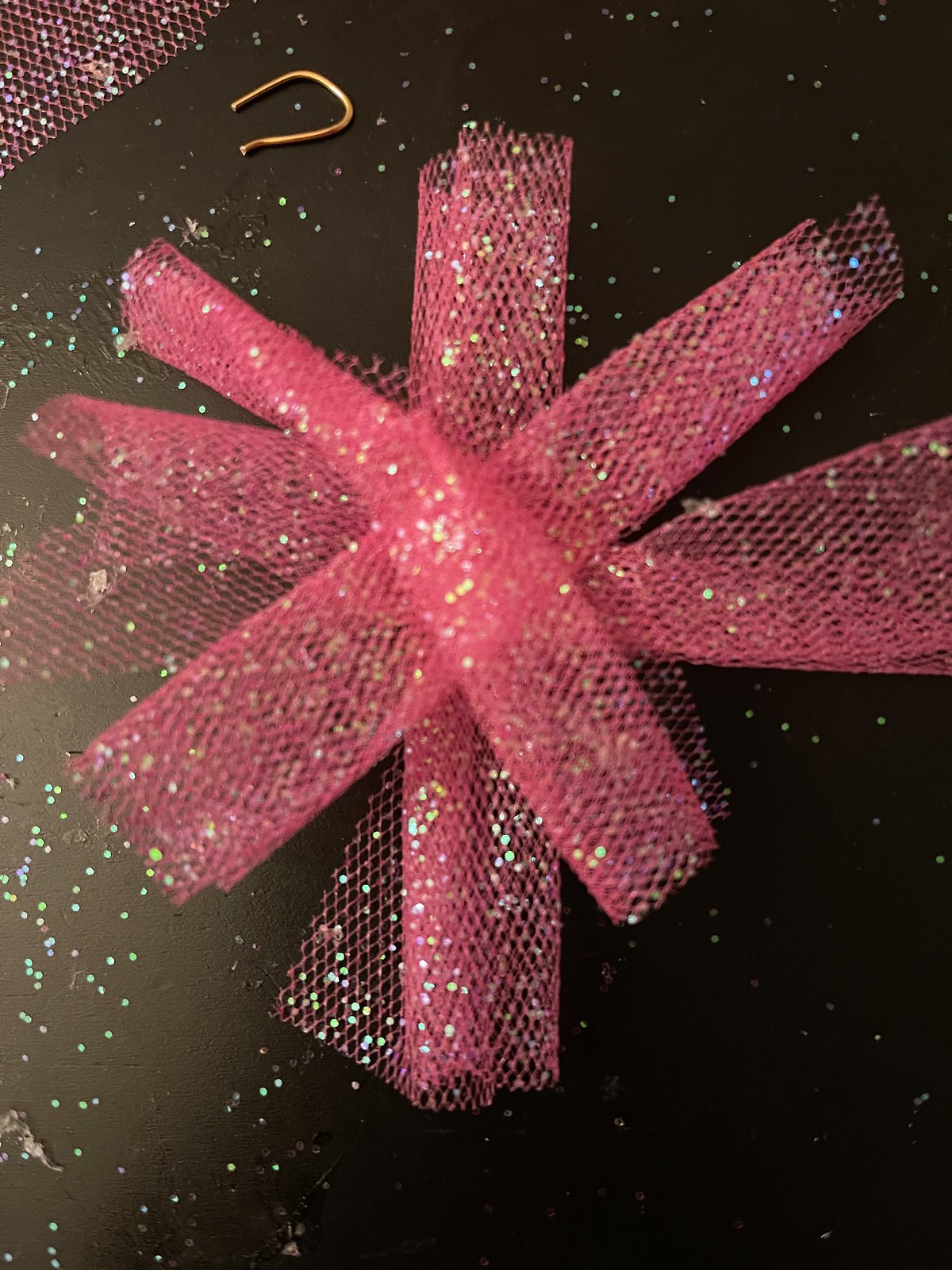 I folded the asterisk in half and pinched the bottom part of it. 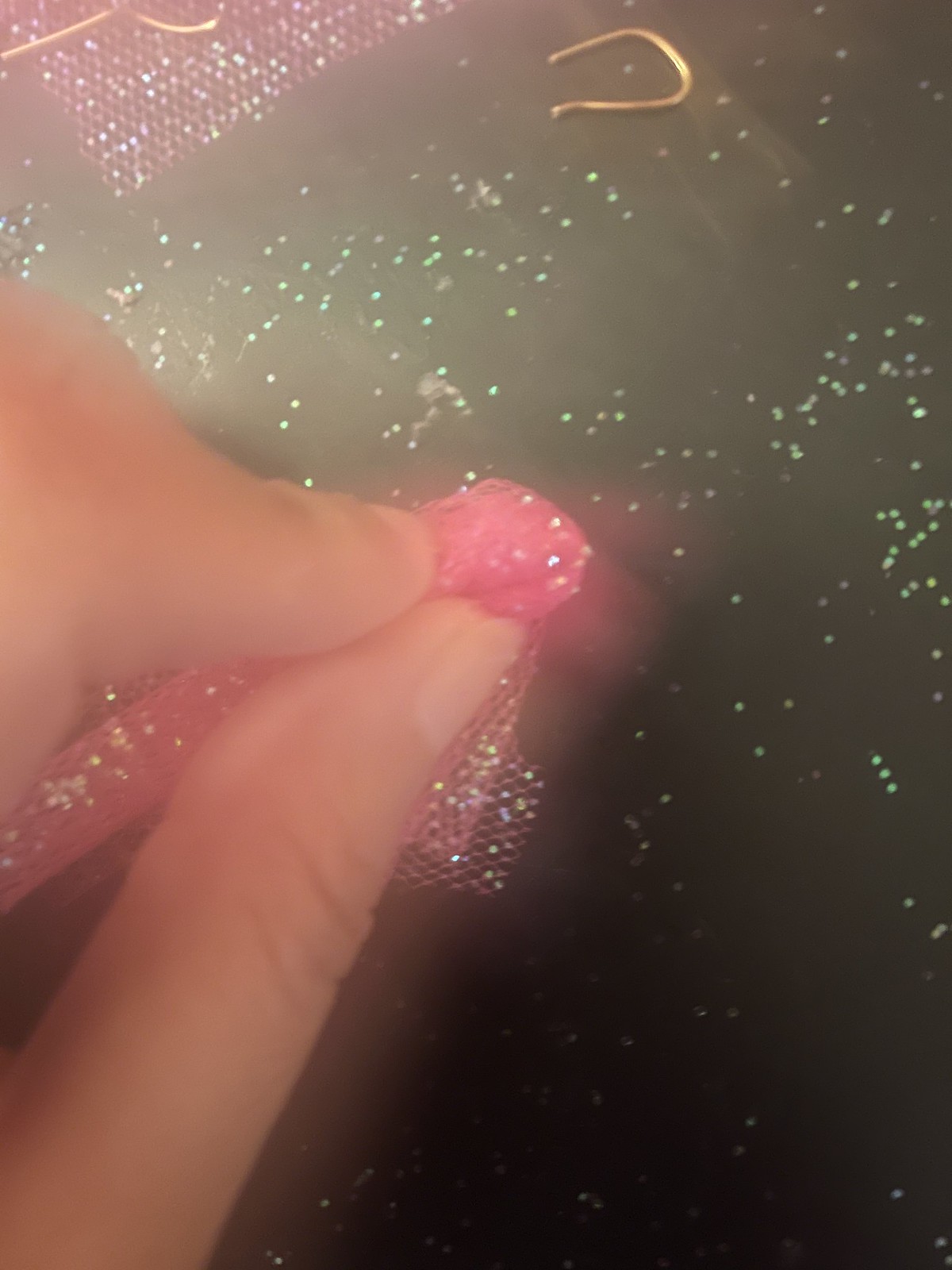 I secured the bottom with wrapping a 20 gauge piece of craft wire around it. 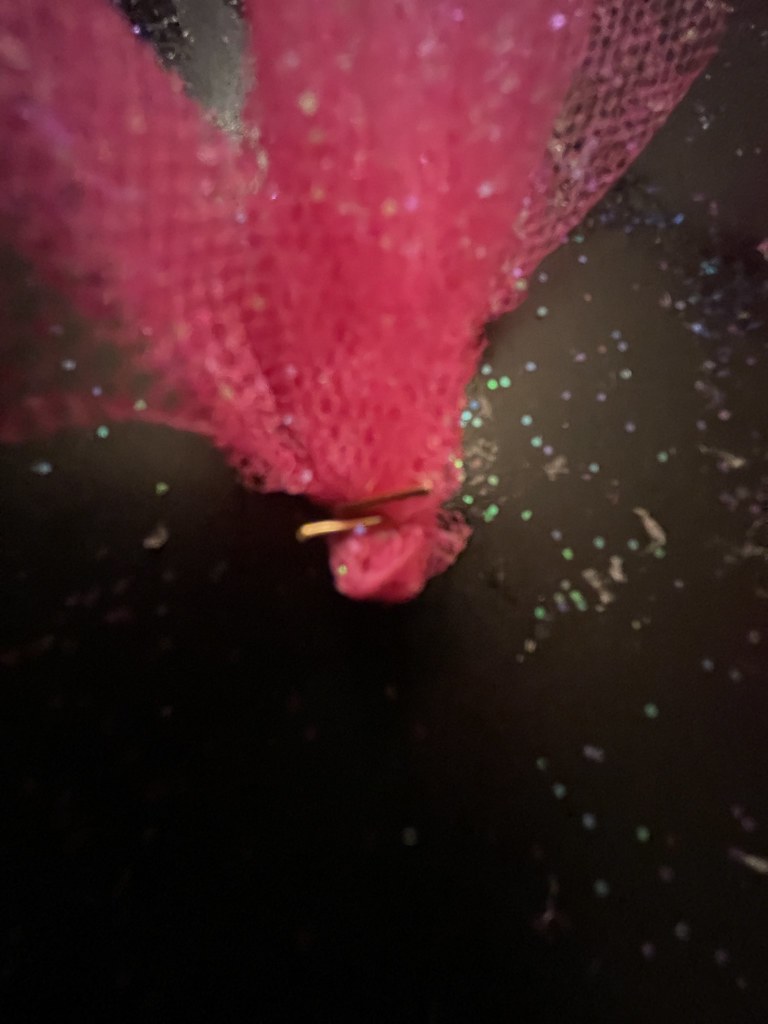 I set that piece aside for later.

I placed a glob of glue on top of the cone and made another asterisk of tulle on top of it.

I grabbed the wire wrapped tulle piece and glued it on top of the asterisk on top of the cone. I held it down until it was secure. 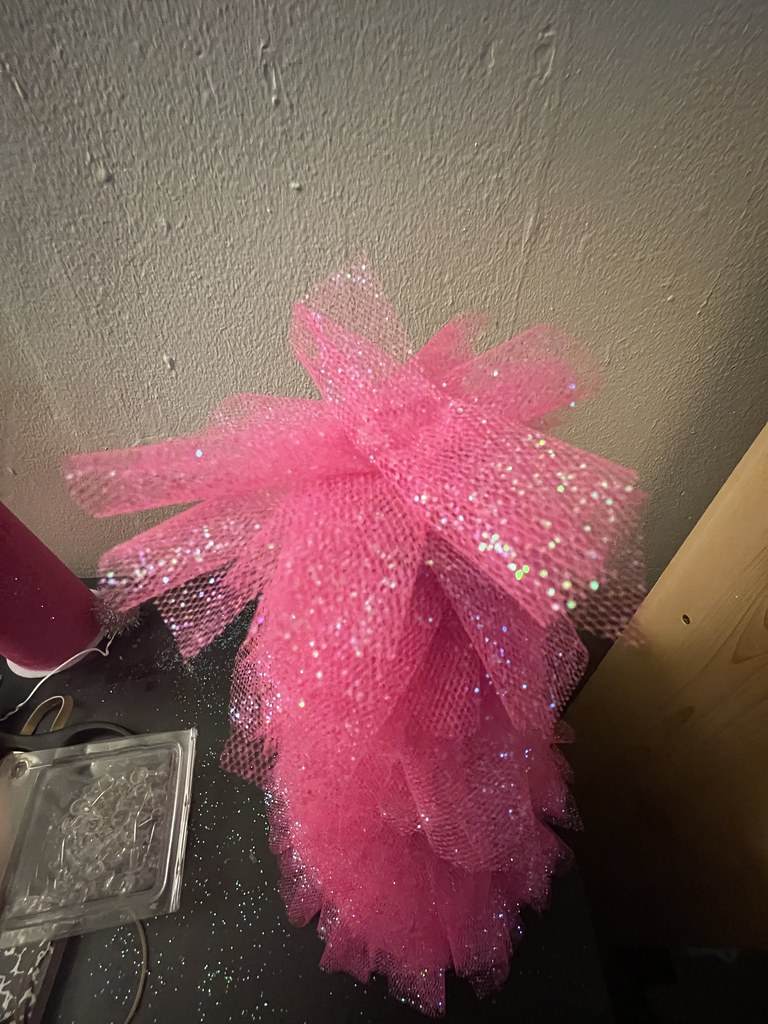 I grabbed a fuzzy pom and glued that on top of the cone and held it down until it was securely glued. 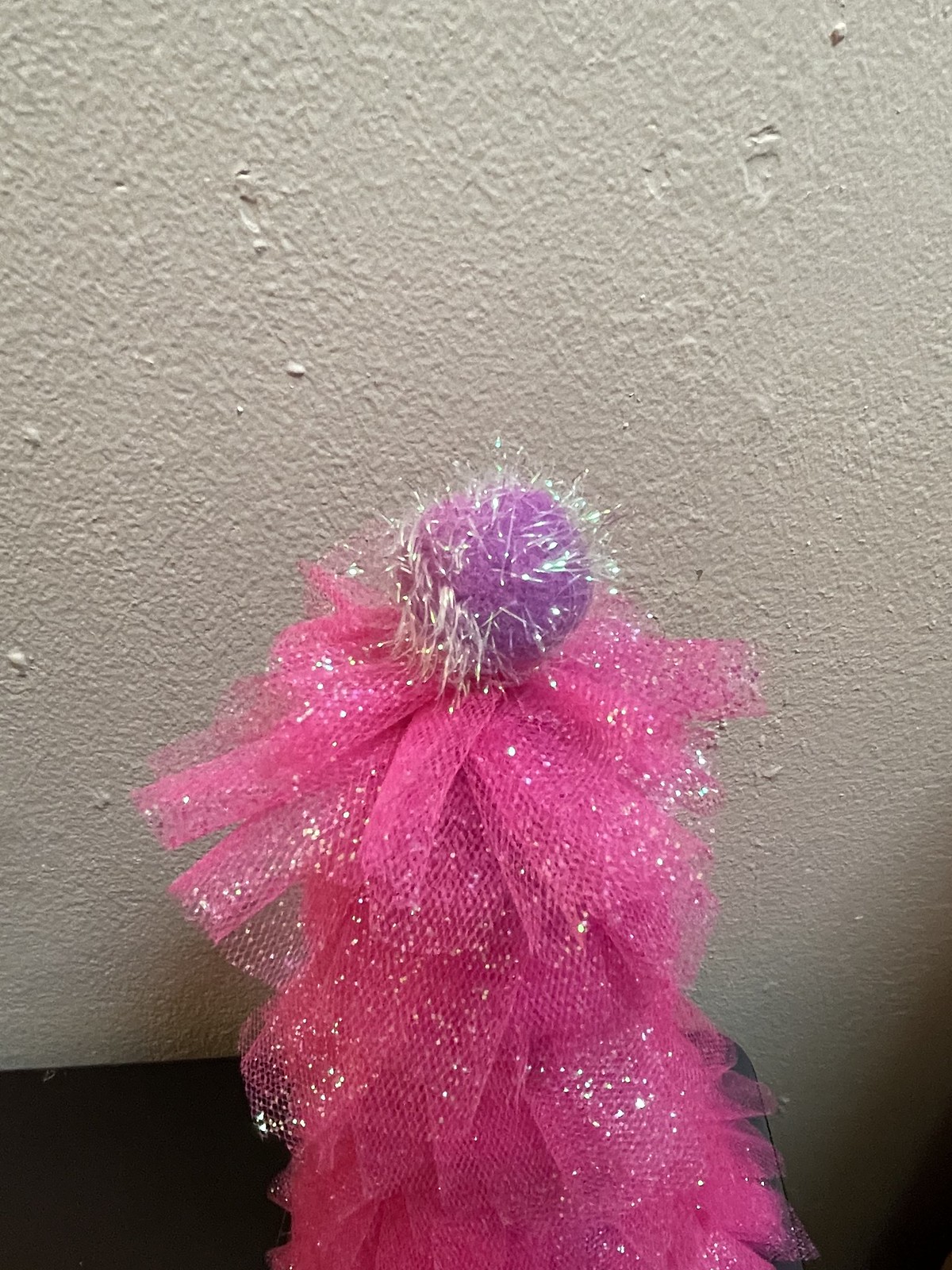 The project is complete!

I think the tulle topping and pom would have been more secure if I would have used a pin to secure it down to the foam cone.

Thanks for visiting Valentines Day Wikii!